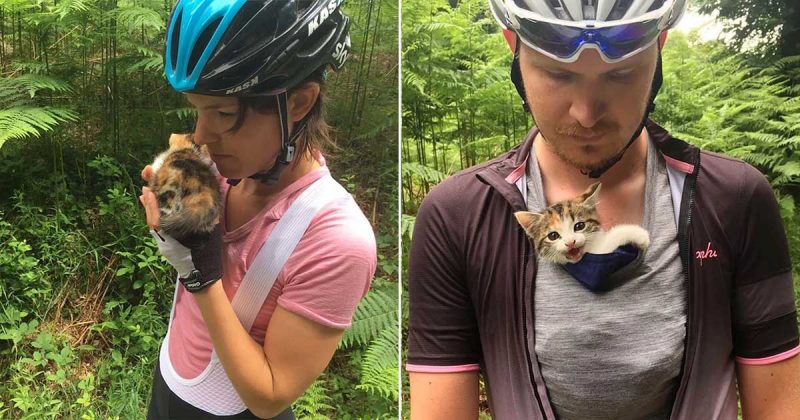 An adorable kitten who was accidentally found wandering alone in a distant forest is very grateful to her rescuers.

In the fields of central Brittany, France, an adorable kitten was found wandering alone in the woods and fortunately got help from a couple of cyclists who were passing by and could hear him.

A married couple was riding their bikes through the woods when they heard a loud noise coming from the bushes. They both stopped to find out what it was and found a small kitten wandering alone in the woods.

Celine and her husband Daniel thought it was a bird at first, but the loud noises were actually a kitten’s meow. 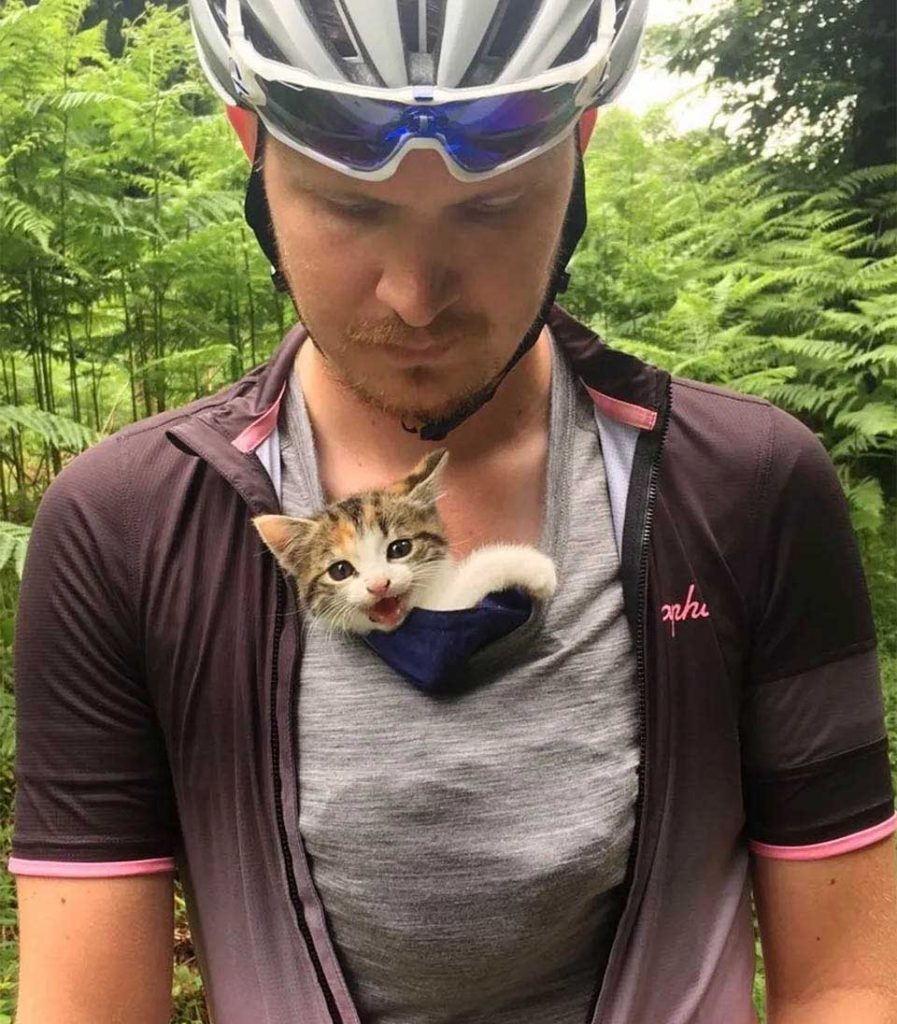 Celine said, “We were crossing a very quiet road and cycling through a forest where there were no houses nearby, when suddenly we heard a loud cry coming from a fern on the side of the road.”

At this time, the kitten was very scared and upset, he did not want to approach the married couple and even tried to get away from them. 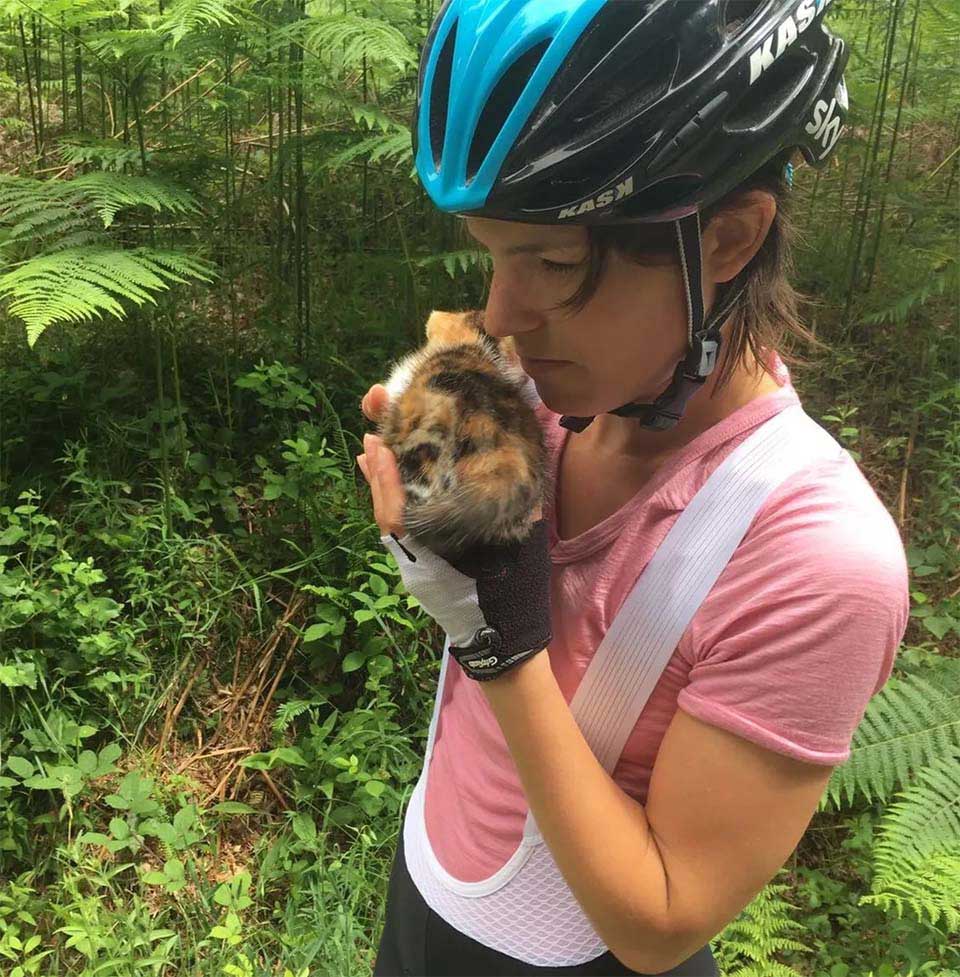 The woman had no choice but to sit on the ground and speak to him in a low voice, trying to gain the little cat’s trust. After a while, the kitten realized that the couple did not want to hurt him, and approached Celine to hug her.

Celine added, “She wouldn’t let go of me. She kept clinging on me (with claws) and crying. We knew we had to try to get her home.” 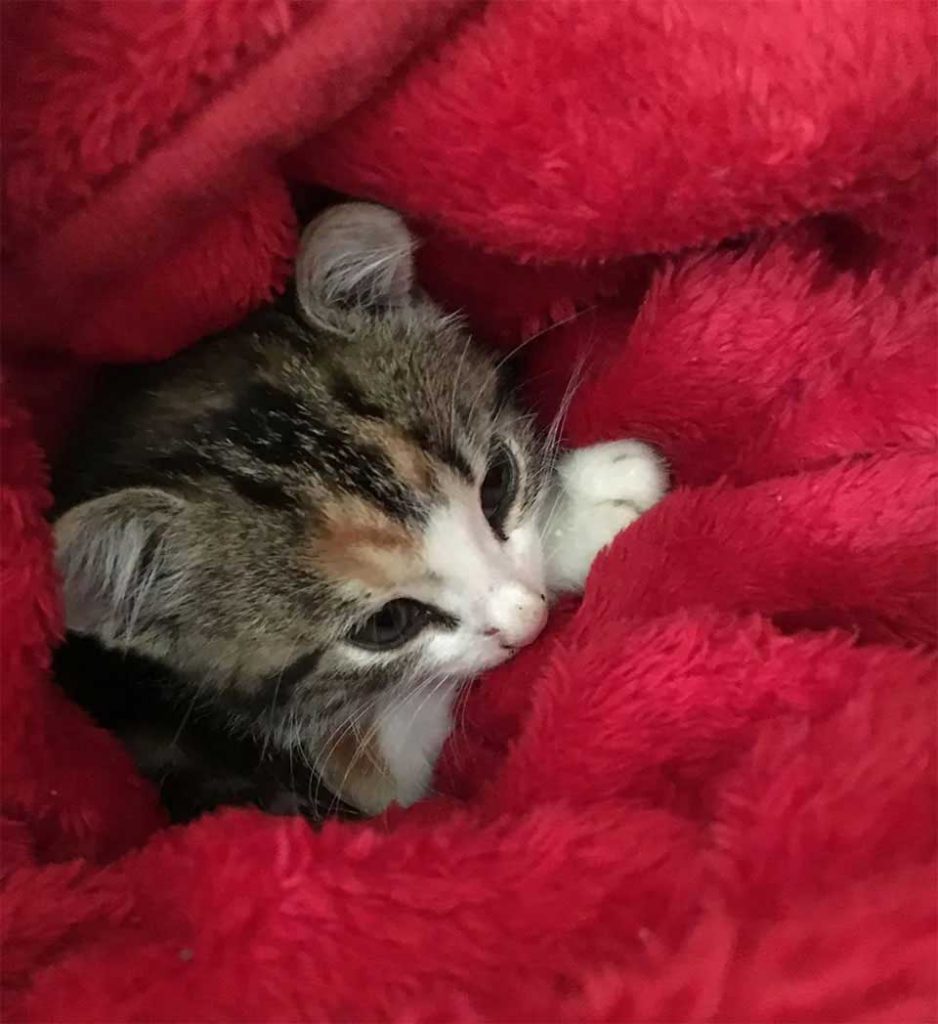 It was a long trip back, but in an attempt to get her back safe and sound, Daniel stuffed her into his shirt. However, the kitten was very restless and was constantly trying to break free, so they decided to go home without her.

They left her in a safe place and quickly cycled home to get back into their car, hoping the cat would not run away. 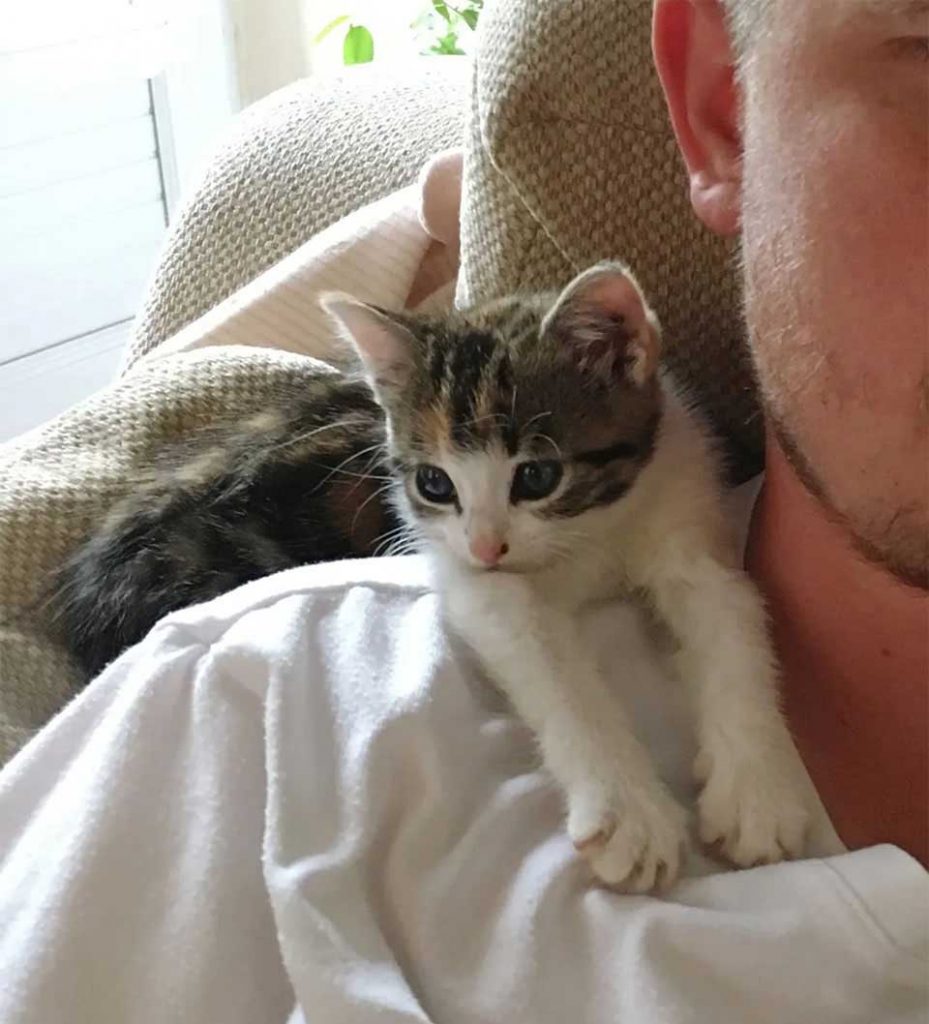 When they got home, they took a cardboard box and set off as quickly as possible into the woods.

Celine adds, “As soon as I got out of the car and called to her, she jumped out and ran towards me.”

The cute cat jumped into Celine’s arms, trying to say that she was ready to go home with them. 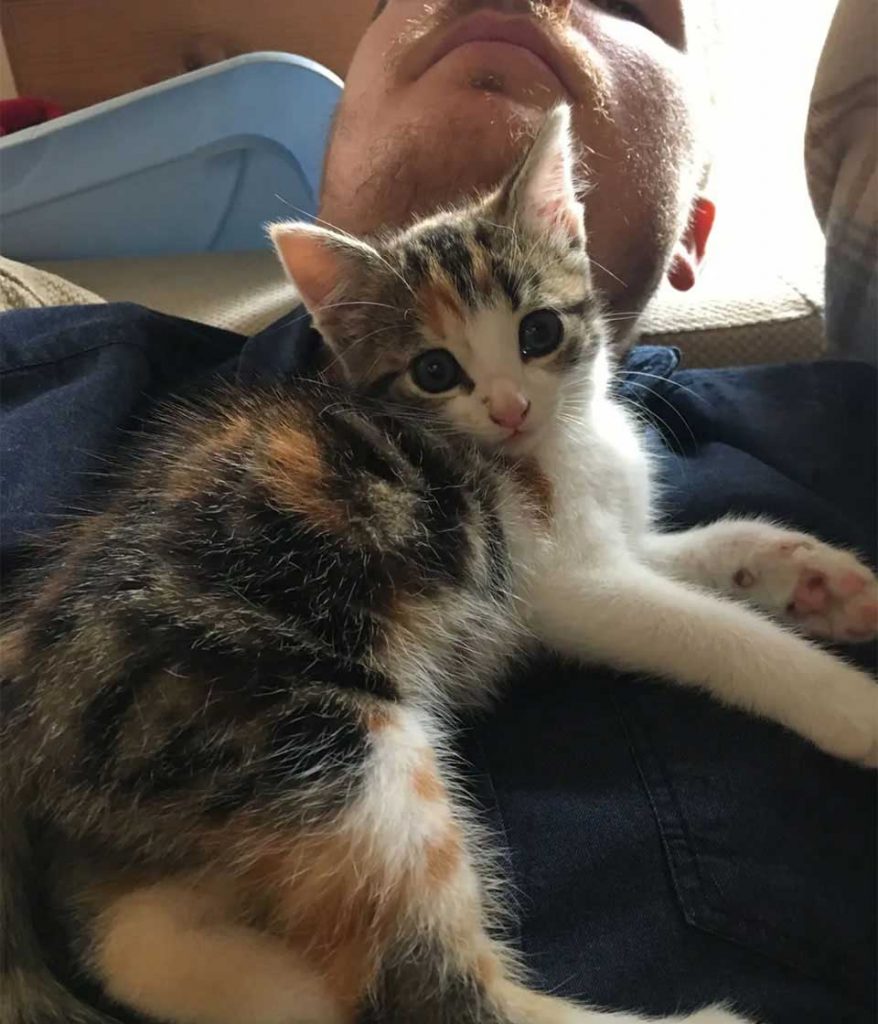 In the days that followed, the kitten named Mini Kitty, adapted to her home, ate like a champ and rested a lot to recuperate. No matter what she did, she was always around Celine and Daniel, apparently, as she felt safe next to his loving and caring owners. 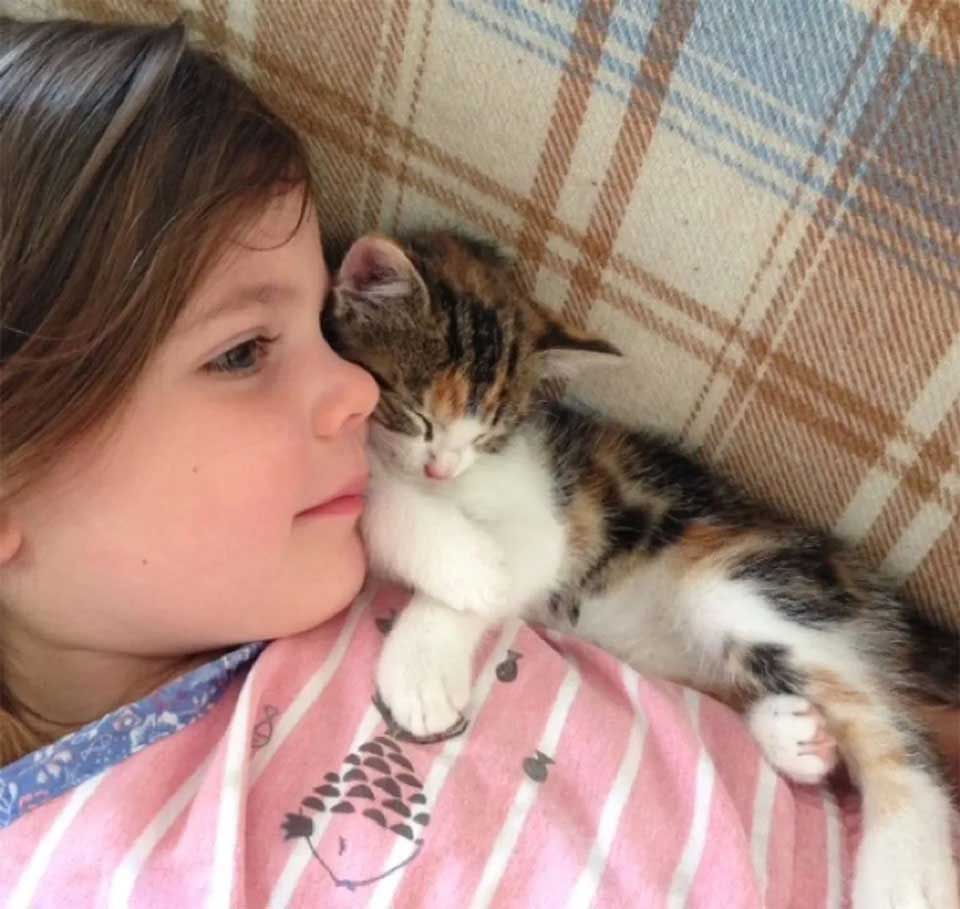 Affectionate Mini Kitty has become a hugging machine and has been hugging everyone and everything ever since.

Celine commented. “She is a beautiful cat, very kind and playful. As soon as she hears us getting up, she runs up the stairs to greet us.”

Mini Kitty is the youngest in the family, but she gets along very well with other pets because of her sweet demeanor. 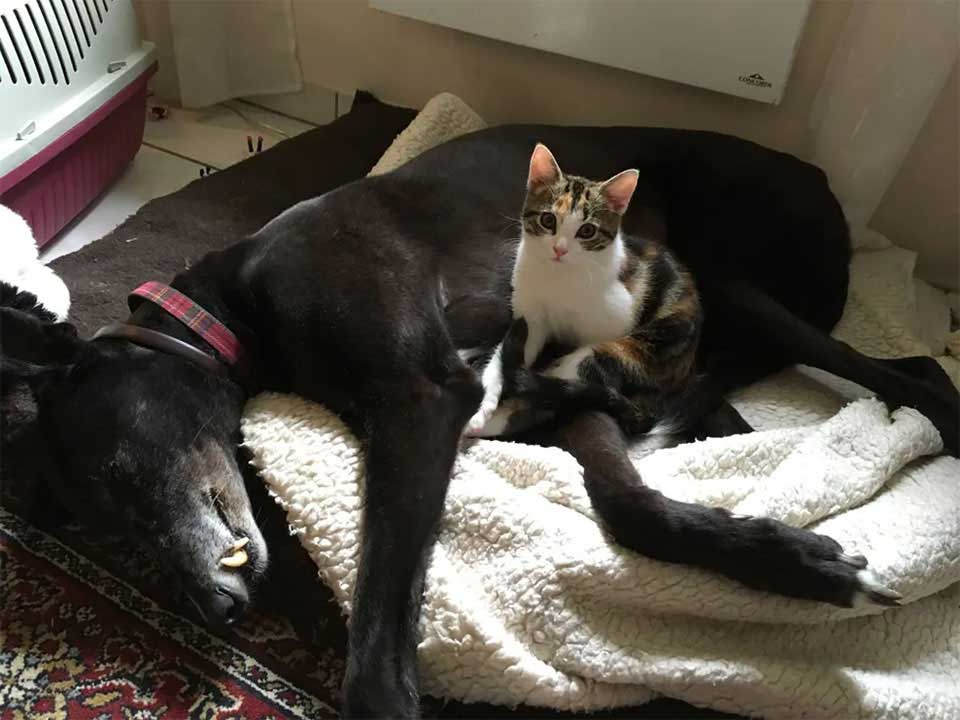 The cute kitty is very affectionate with everyone and has such an lovable personality that makes everyone’s day.

Three years after saving Mini Kitty, the shy little kitty is no longer the same, but some things never change and she still hugs her loving parents. 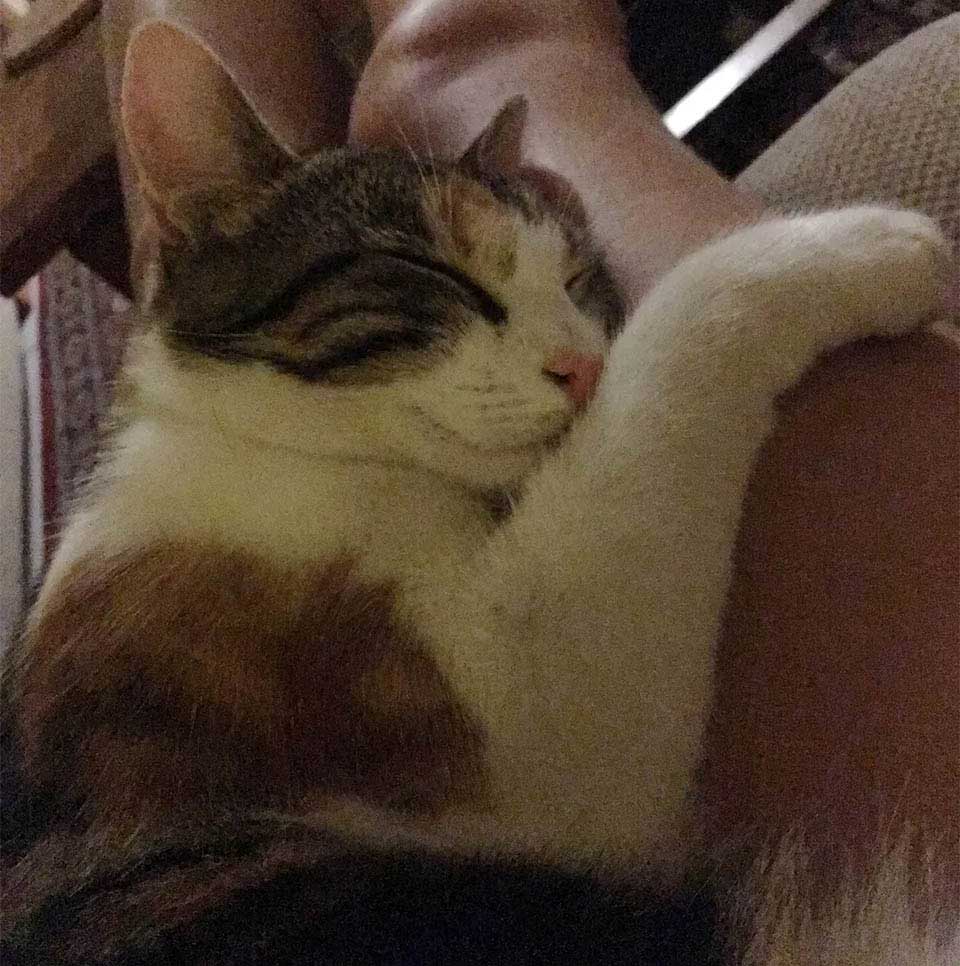 Daniel and Celine came into the sweet kitty’s life when she needed them most, and she will surely be eternally grateful to them.