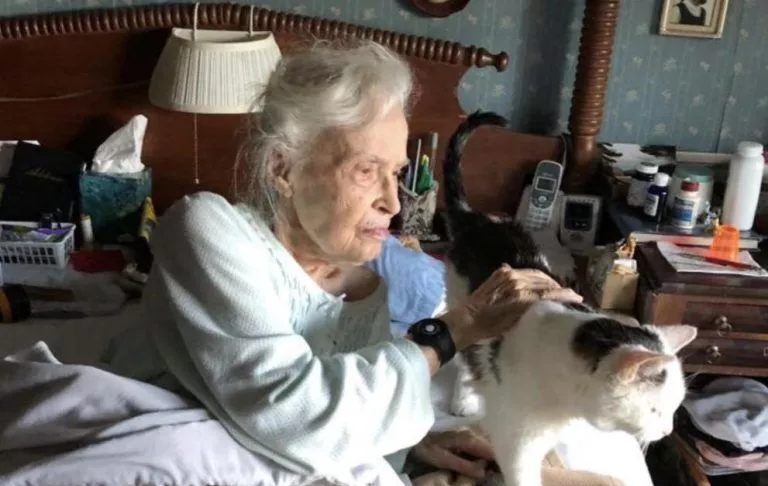 The average cat lifespan is between 12-15 years, so when you hear about a kitty that has reached the ripe old age of 19, you know it’s no small feat.

A cat named Gus is once such a kitty, he was left by his owners at a shelter in North Carolina when they, for whatever reason, couldn’t look after him anymore.

Thankfully the shelter had a no-kill policy and the staff felt that because of his 19 years, Gus would live out his days there but they couldn’t have been more wrong.

Not long after Gus arrived at the shelter a family got in touch as they were looking for a cat to be a companion for Penny, their 101-year-old relative.

Penny’s kitty had recently passed over the rainbow bridge and it was felt that a senior cat would be more of a match for her.

The shelter was hesitant at first because at Penny’s age they were worried she may not be able to take proper care of Gus. But the family assured them that they would be looking after him, Gus was just there to be a companion and friend to Penny.

This was good news to the shelter because usually, people are looking to adopt younger kitties and more often than not, the older ones get left behind.

Penny and Gus instantly got along and he soon settled into his new life, he especially loved watching the squirrels through the window.

A spokesperson for the shelter wrote on Facebook: “Our hearts are full with this beautiful adoption. Our 19-year-old (133 in human years) Great-GrandPAW, has found the loving arms of his new mamma who is the ripe young age of 101. Congratulations Gus-Gus! Wishing you the best days ahead, watching squirrels and sharing your love and purrs!”

This heartwarming story has shown us that you’re never too old to make a new friend!