We all make mistakes, but it’s much better when they turn into a silly story than a tragic situation.

When the woman brought the wrong dog home from the groomer’s, she was initially furious. But now his situation has gone viral because of the humor.

Taikesha Cherry bought her Maltese/Poodle mix from a groomer in Virginia. But when she got to the car, she discovered that the employee had given her the wrong dog. To make it even funnier, the dog she picked up had the most grumpy and frustrated expression on its face.

10 month old Lucky had a real adventure during her last grooming visit. When Cherry entered, the receptionist asked if she was picking up Bentley, but Cherry quickly corrected them and said that she was Lucky’s mother.

As she paid for the cut, someone handed her a small white dog.

“I didn’t get a good look at it. Everything I saw was white. I went to the car and sat down. He turned around and I thought, “He looks so different. Did I mix something up?” Cherry said. 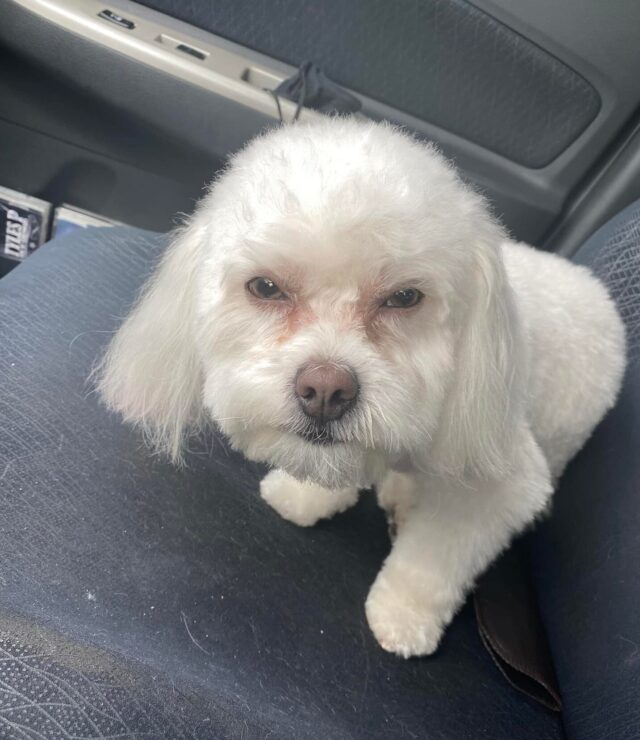 When Cherry called the dog’s name, he didn’t answer. Instead, he looked at her with the most disapproving eyes.

Cherry then noticed that her eyes and fur pattern were slightly different from Lucky’s, which meant something was wrong.

Cherry called her boyfriend Quinn Young to make sure she wasn’t imagining things. He confirmed that the dog in the car was not Lucky.

As soon as Cherry heard these words, she ran inside with a sullen puppy named Bentley.

This is how Bentley became famous!
Everyone in the grooming business was shocked at what had happened and quickly apologized.

It’s a little mistake that anyone could have made, but both Cherry and Yang said they wouldn’t be coming back.

“I thought, ‘That’s not my dog, where is my dog? Where is my puppy?’ They were shocked, everyone was shocked,” Cherry said. “I understand the confusion, they are both white, but I thought they would have tags on the back or something.”