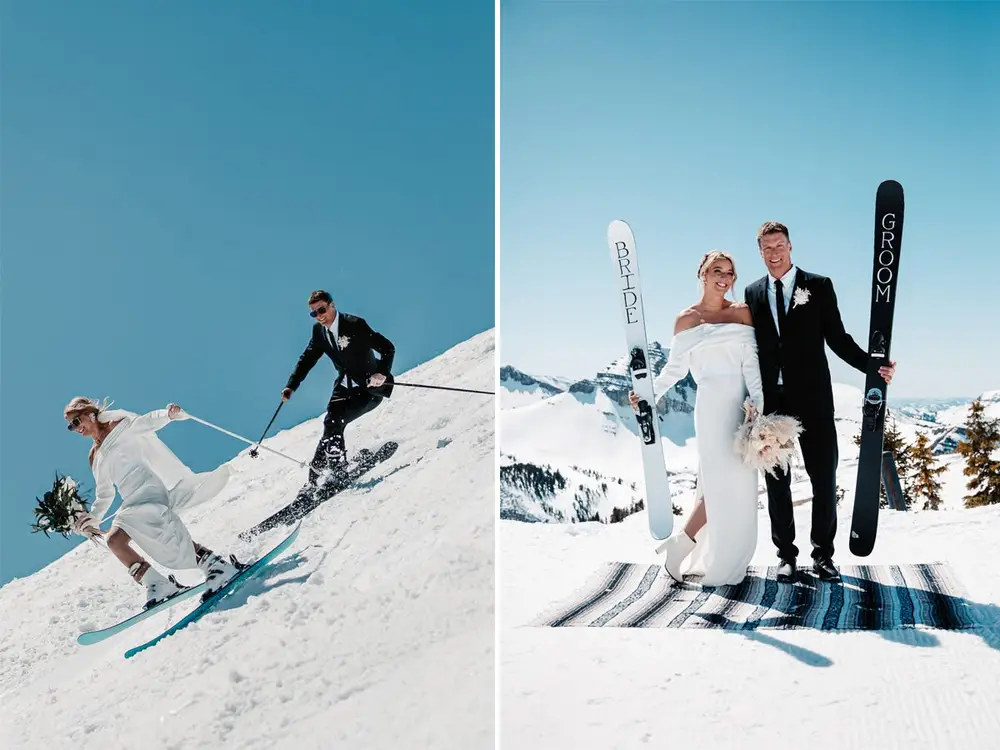 Hayley Badenhop and Owen Leeper skied at their wedding ceremony.

Hayley Badenhop and Owen Leeper were married on 3 April 2022.

They left their ceremony at the top of the mountain, skiing in their wedding attire.

Badenhop fitted their skis and carried her bouquet as she descended the mountain.

Hayley Badenhop has always dreamed of getting married at the top of a mountain. 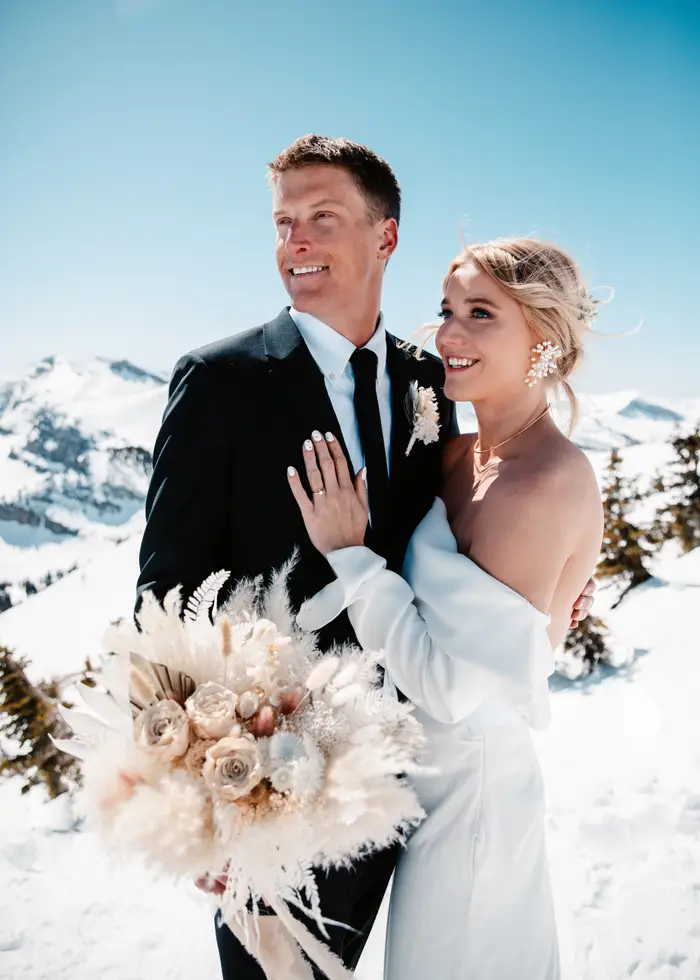 The 35-year-old Badenhop works as a full-time muralist in Jackson Hole, Wyoming, where she met 37-year-old Owen Leeper, a professional skier.

Badenhop and Leeper first met at a volleyball game in 2018, bonding over a friendship before falling in love.

“I’m originally from Ohio, from a flat farm in Ohio,” Badenhope told Insider. “I moved to Aspen right after college, and now we’ve both lived in Jackson for 10 years.”

“As for me, once I got to the mountains, I thought, ‘Oh my God, this would be such a cool place to get married,'” she said. “I’ve always wanted a mountaintop wedding, but I never knew the logistics behind it or if it was possible.”

After Leeper proposed in 2021, the couple started thinking about how they could make their wedding look like it represented them. 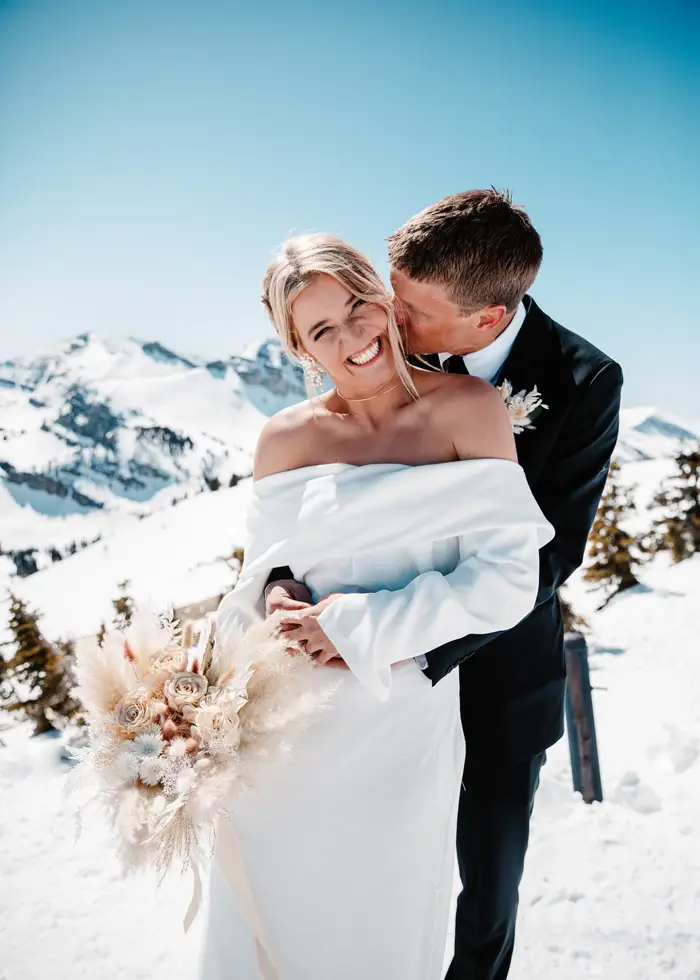 Although they got engaged in September 2021, Badenhop and Leeper did not start planning their April 3, 2022 wedding until January.

They decided to wed at Jackson Hole Mountain Resort, where Leeper is a sponsored skier, during the last week of the ski season.

As they said their vows on the snow-covered mountain top, it just made sense for Badenhop and Leeper to leave the ceremony skiing.

Leeper and Badenhop made personal vows to each other at a mountain top. 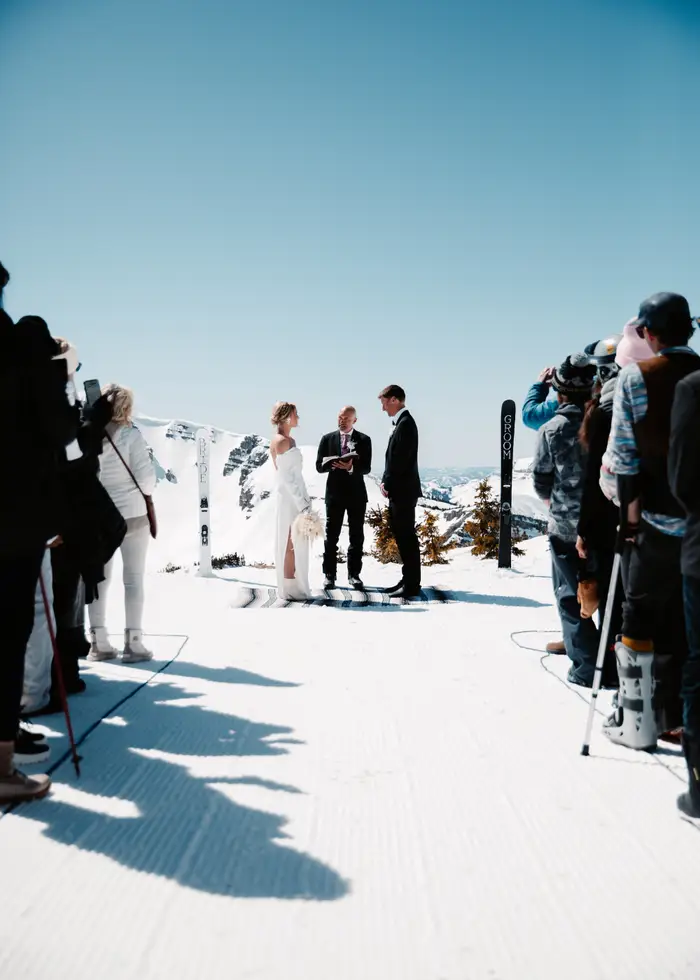 Badenhop, Leeper, and their approximately 75 guests used a ski tram to get to the spot they selected for their ceremony — which Badenhop said can be hit or miss weather-wise.

“Where we had the ceremony is notoriously windy,” Badenhop said. “It’s very unpredictable.”

Badenhop said she was a bit apprehensive the weather would interrupt their nuptials, but they got lucky.

“It was the most perfect day that happened all season, and then oddly enough, the next day, it was freezing and windy and they shut the tram down, which was what brought over guests to the top,” she said.

Badenhop wore a dress that would allow her to ski with ease. 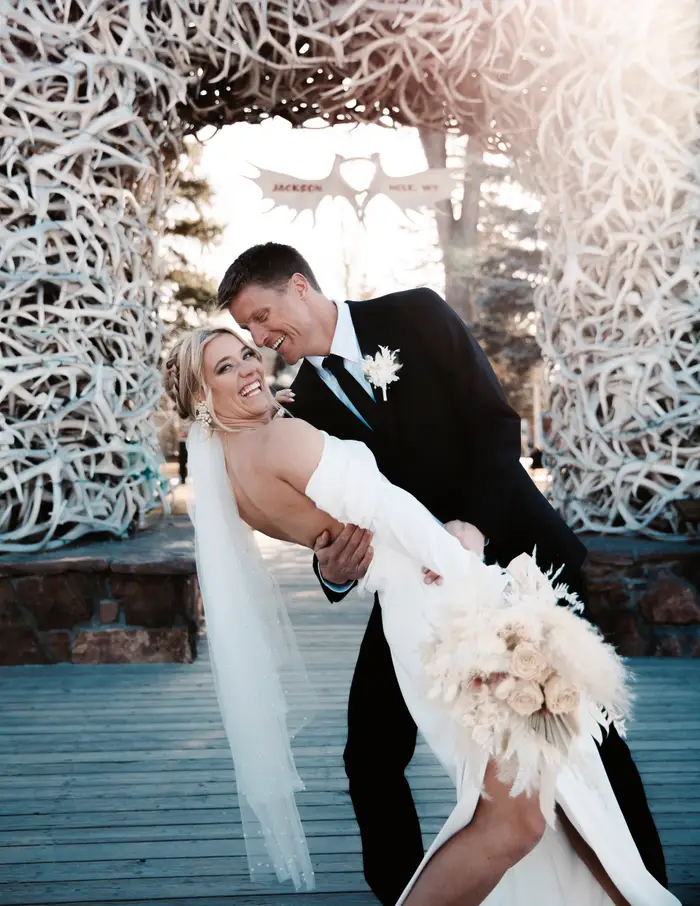 Although she works as a muralist today, Badenhop went to fashion school and planned to work in bridal early in her career, as she told Insider. Because of her background, she had a pretty clear vision of the kind of wedding dress she wanted to wear.

The floor-length dress had a thigh-high slit, which made it easy for Badenhop to slip on ski boots.

The dress was also backless, with only the sleeves holding it up. 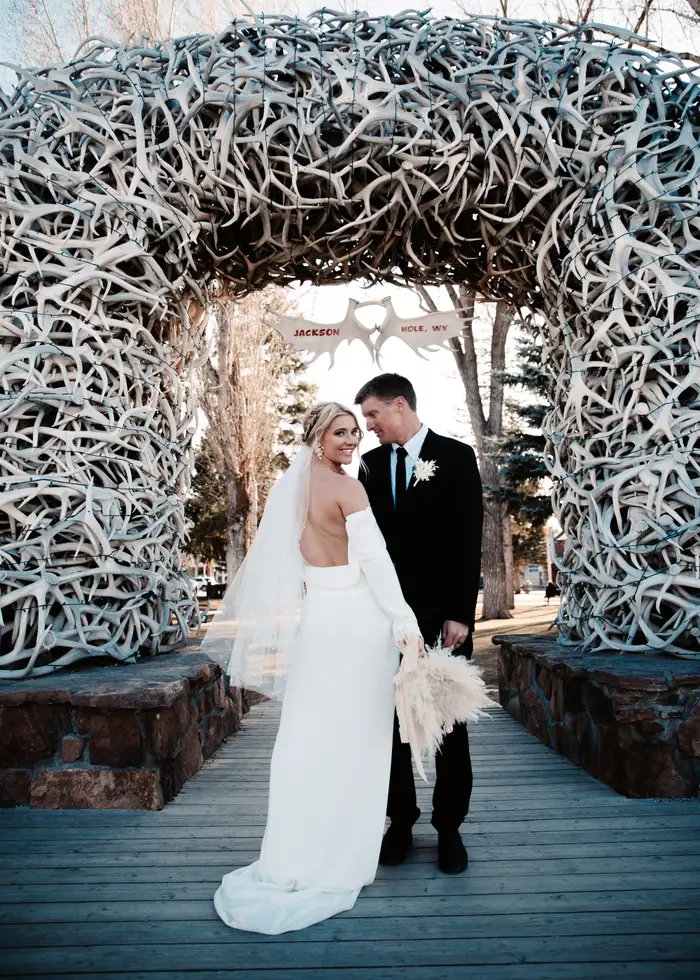 Elastic inside of the sleeves holds the dress up, and Badenhop used fashion tape to help ensure it stayed in place too.

The back of the dress also featured a puddle train, which Badenhop said could be bustled with buttons at the back to make skiing easier.

She added a waist-length veil from ASOS to the romantic and gravity-defying gown. Badenhop also wore a fur jacket from Selfie Leslie on her way to the ceremony to keep warm.

An updo from Jaclyn Harmon of Frost Salon and a dewy makeup look by Abbey Hewes completed the look.

Badenhop accented the dress with a back chain that read “Leeper.” 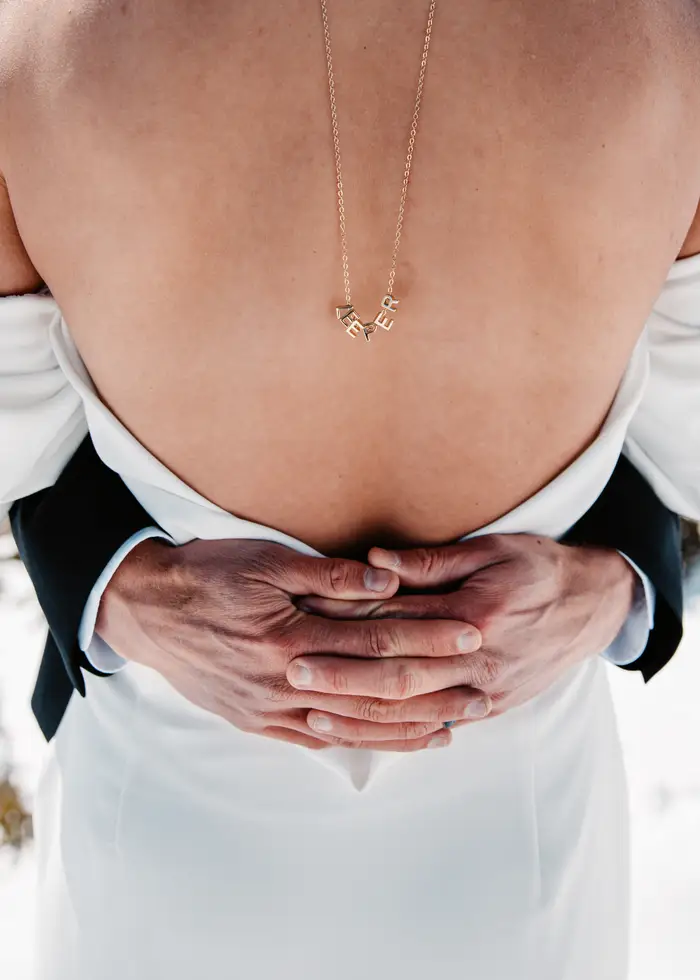 Badenhop ordered a custom choker with a back chain that read “Leeper” from Glamrocks Jewelry.

It added not only a personal touch but a modern flare to the romantic dress. 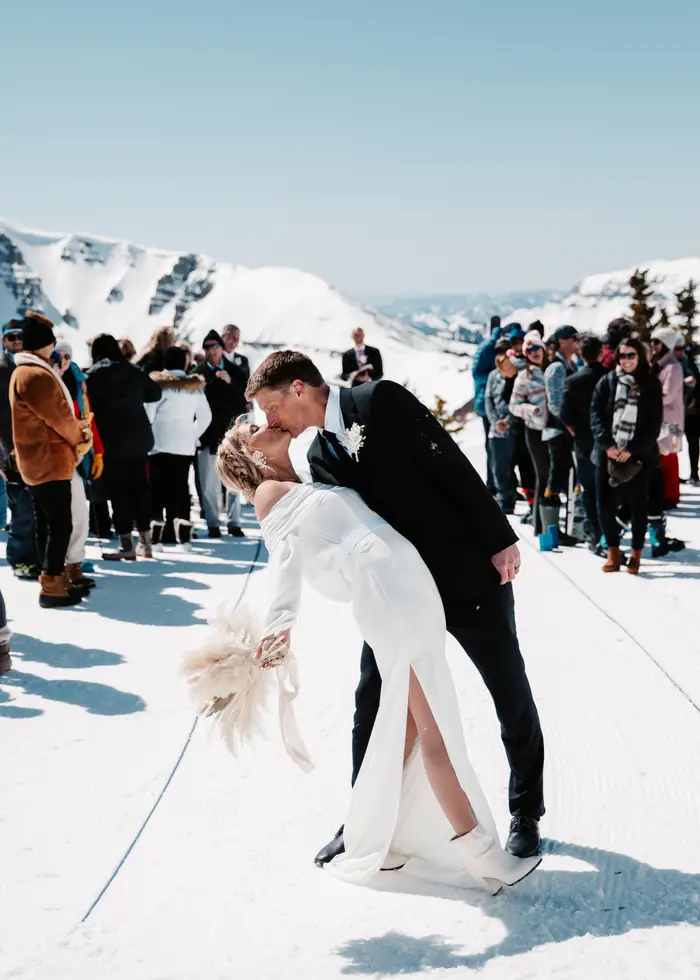 The Betsey Johnson boots gave the dress a winter feel, and they made walking around the mountain venue manageable.

Badenhop wore Charlotte Stone shoes throughout the day as well.

Badenhop customized wedding skis for herself and Leeper. 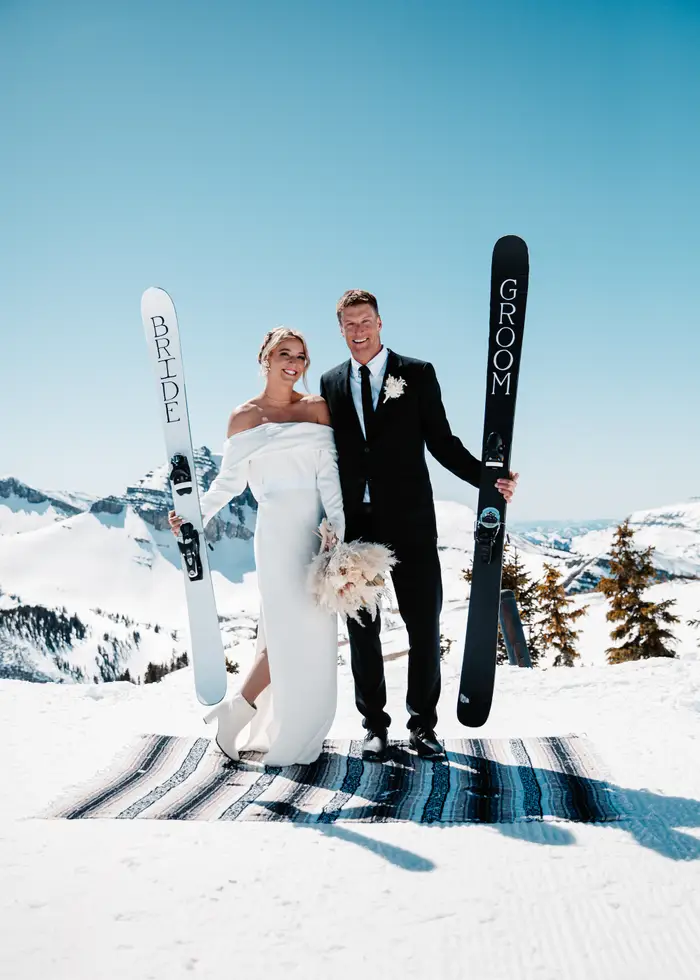 As they planned to incorporate skiing into the wedding, Badenhop wanted to ensure the event had a chic feel.

“Since we ski every day, I just didn’t want it to be like any other day,” she said. “I wanted it to really feel special and like it was put together really nicely.”

One way Badenhop did that was by customizing her and Leeper’s skis for the event.

She put vinyl covers over the skis, using white for her skis and black for Leeper’s, and painted “bride” and “groom” on them.

She also designed their invitations.

She also made sure her ski boots matched her bridal look. 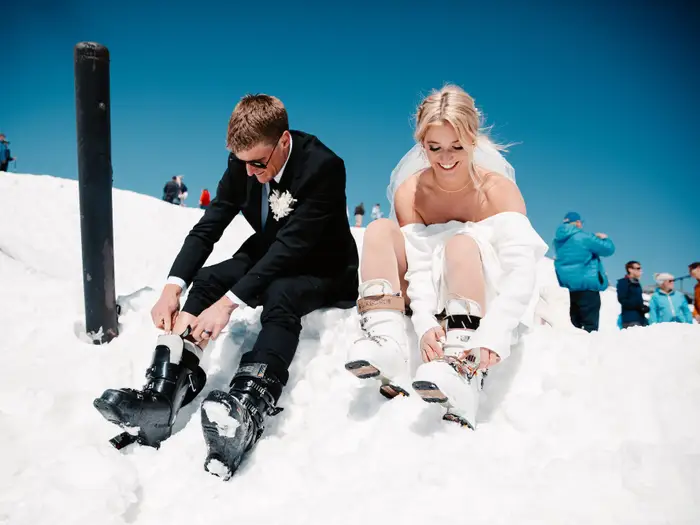 Badenhop’s ski boots are a shade of blue, so she considered using them as her “something blue” for the wedding.

But she ultimately decided white would look more cohesive, so she spray-painted an older pair of her boots.

Leeper’s boots were already black, so they matched his black tuxedo.

Immediately following the ceremony, Badenhop and Leeper added skis to their wedding looks. 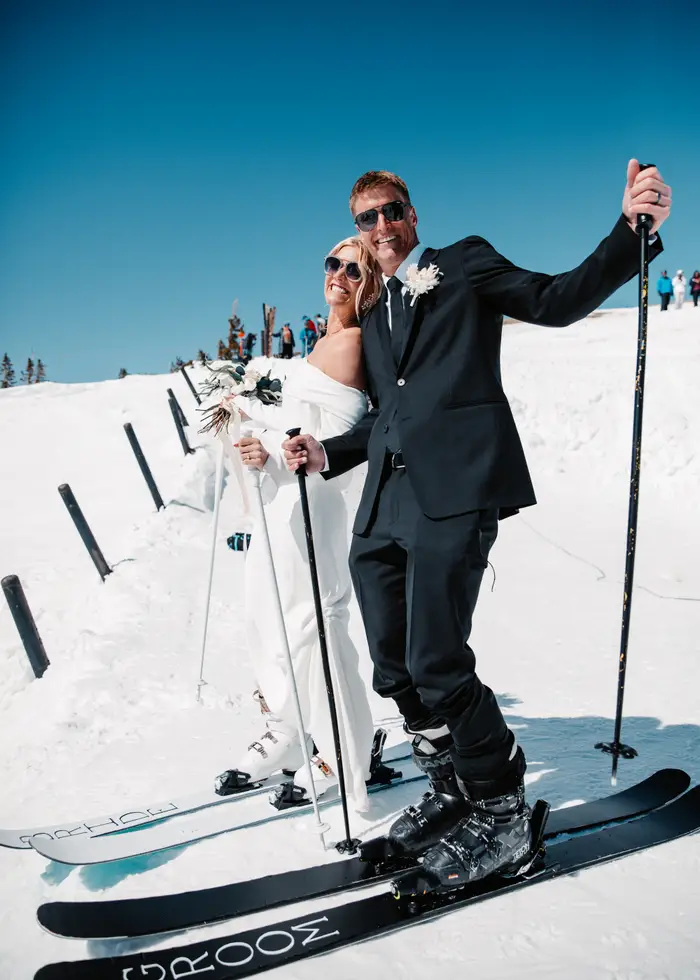 Badenhop also spray-painted her poles to match her bridal look.

Leeper wore a Theory ensemble with a tie designed by Badenhop and Ponto Footwear shoes.

Many of the couple’s guests skied with them. 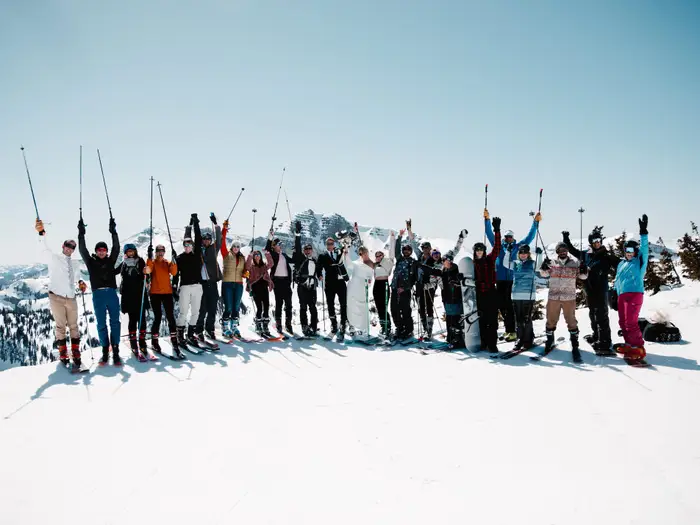 Of Badenhop and Leeper’s 75 guests, about 20 joined them in their skiing exit, as Badenhop told Insider.

“We didn’t know if anybody was gonna come ski with us, and then a bunch of people just showed up with their skis that day,” she said.

The rest of their guests took the tram down to the bottom of the mountain at Teton Village where Badenhop had set up an après-ski spread of champagne and charcuterie.

“It was so fun,” Badenhop said of skiing with her husband. 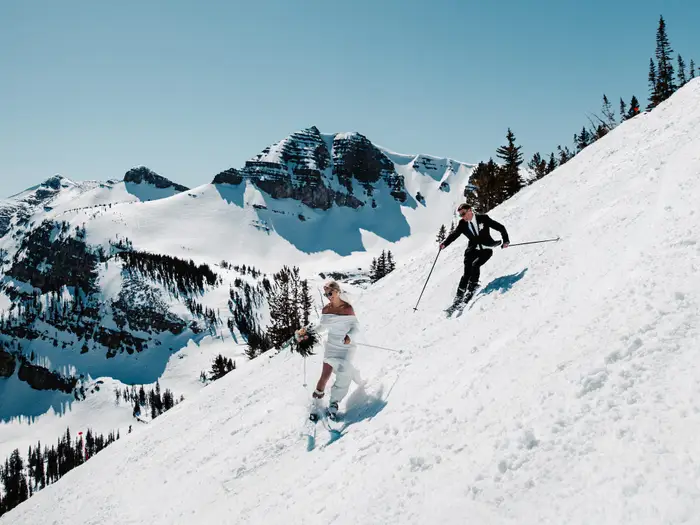 The couple’s wedding photographer, Elise Sterck, skied down with them, capturing their once-in-a-lifetime trip down the mountain.

“She takes a lot of Owen’s photos during the winter if he’s going out for a big day or jumping off cliffs,” Badenhop said of Sterck. “I’ve always loved her editing style and the shots that she gets, so I knew she would just get killer shots.”

“We were just smiling the whole time,” Badenhop said of herself and Leeper as they skied. 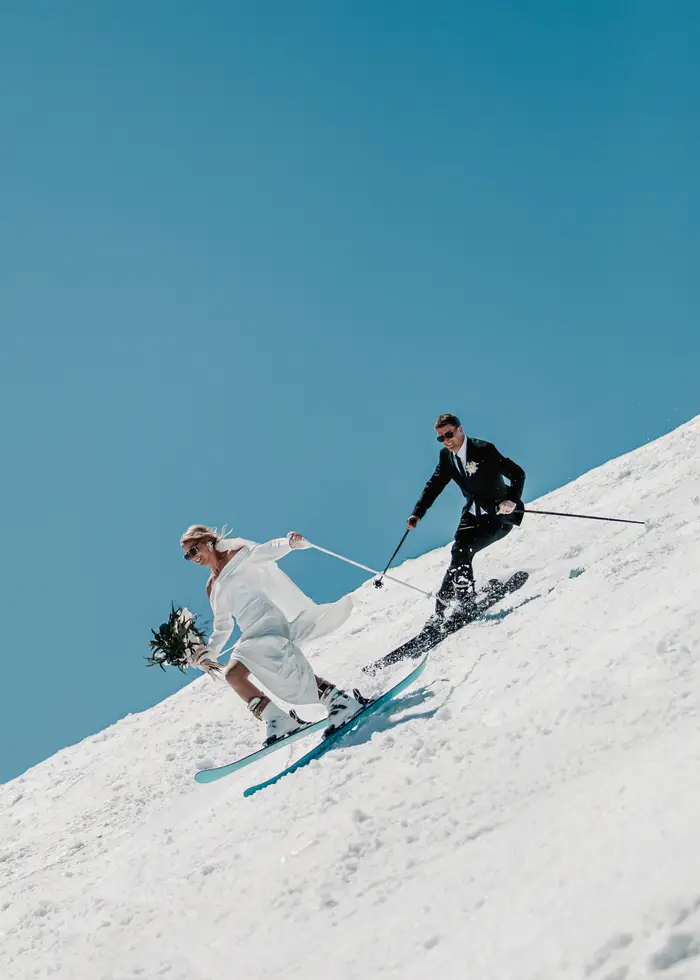 Badenhop carried her bouquet of dried flowers from Decor Flower Bar with her as she and Leeper made their way down the mountain — as if skiing in a dress wasn’t enough of a challenge. The wedding also featured flowers from Fern & Sunpalm.

Badenhop posted a video of herself and Leeper skiing that Leeper filmed, as well as other TikToks of them from their wedding day. The video filmed by Leeper has over 5 million views as of Friday.

Badenhop and Leeper looked gleeful as they finished skiing. 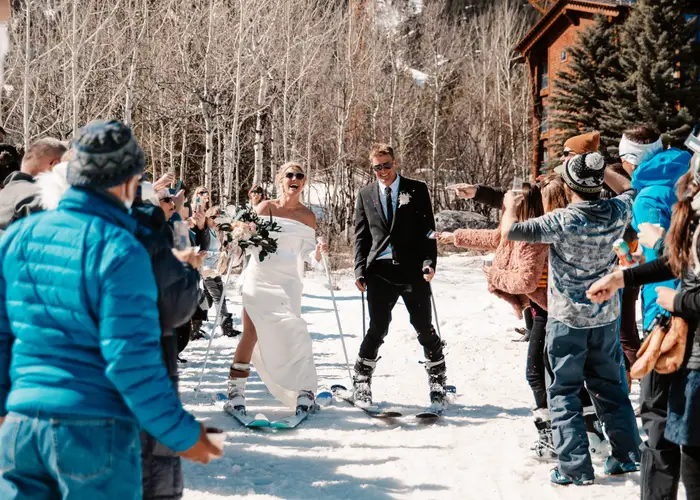 The non-skiing guests also had flower petals they could toss at Badenhop and Leeper as they arrived at the bottom of the mountain.

The newlyweds and their guests went to their reception at The Wort Hotel in Jackson after the couple’s big entrance. DJ Marco Flexx provided entertainment at the event.

Badenhop thinks the personalized nature of her and Leeper’s wedding made it special. 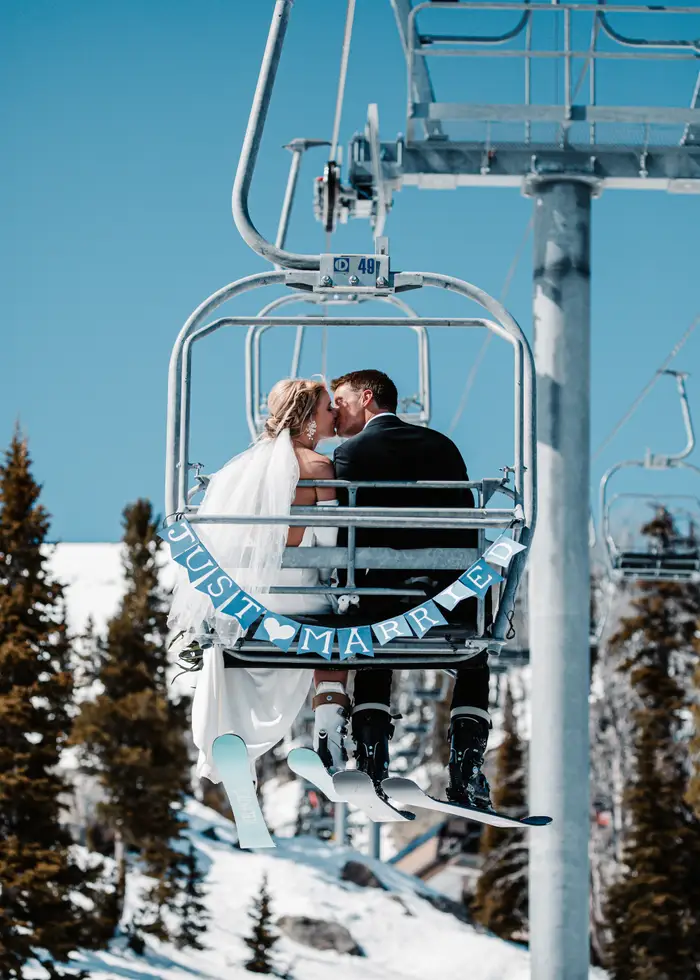 “The one thing that I was trying to get away from the most was just to have a cookie-cutter wedding, and I think the coolest part of a wedding and the most memorable parts are when you add in these pieces that are little stories about your lives and doing that in a way that’s meaningful to you,” Badenhop said.

She advises other couples who are having adventurous weddings to incorporate these personal features, as it will make guests connect with them more too.

Although the skiing was fun, Badenhop said her favorite part of her wedding day was her ceremony. 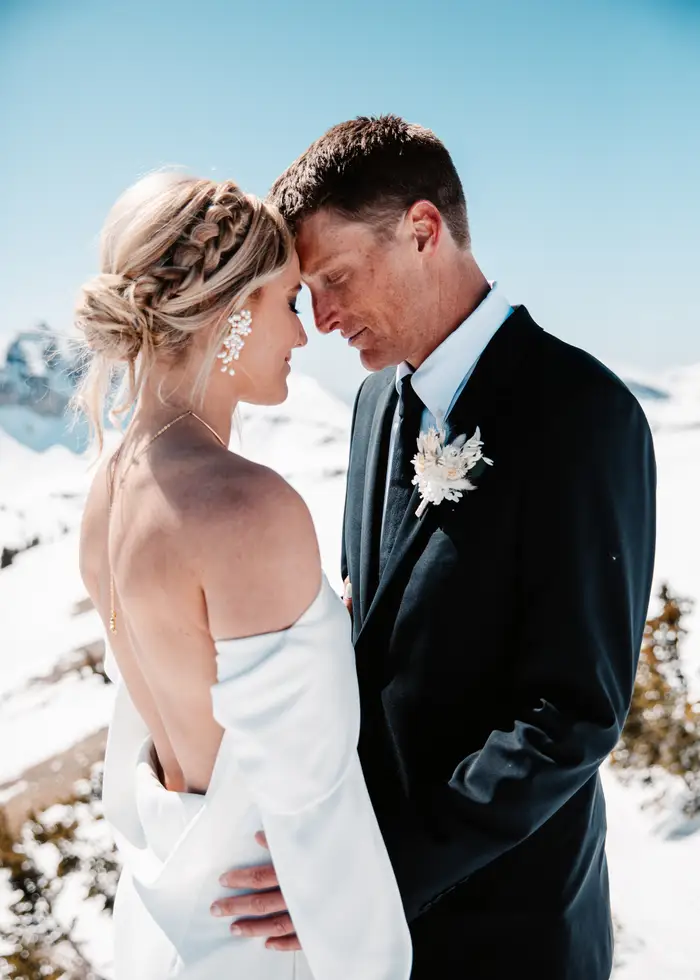 For Leeper, skiing with his bride was the highlight of the wedding day, but for Badenhop, the ceremony stood out.

“Walking down the snow-plowed aisle with music playing and seeing everybody standing there in a perfectly sunny day and Owens standing there smiling, it was such a cool moment to do something like that,” she said. “It was very surreal.”

She and Leeper promised their lives to each other with personal vows, which was Badenhop’s idea. She surprised herself by crying throughout the ceremony.

They exchanged rings from JC Jewelers.

Badenhop said she loves the sense of adventure Leeper brings to her life. 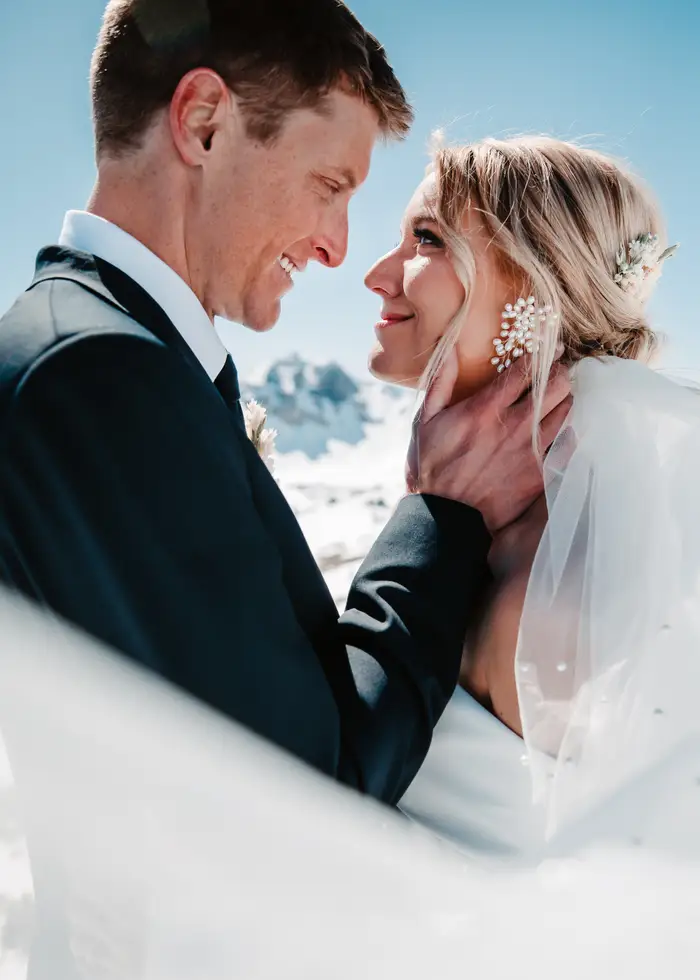 “It’s the sense of adventure that he brings to the relationship that is my favorite thing,” she told Insider. “He also brings a lot of laughs to me.”

“He’s always so calm and has an adventure planned like every day for us. If I would let him, he would have something for us to do every single day,” she said. “His way of showing love is to have us do things together that are meaningful. I love that about him.”