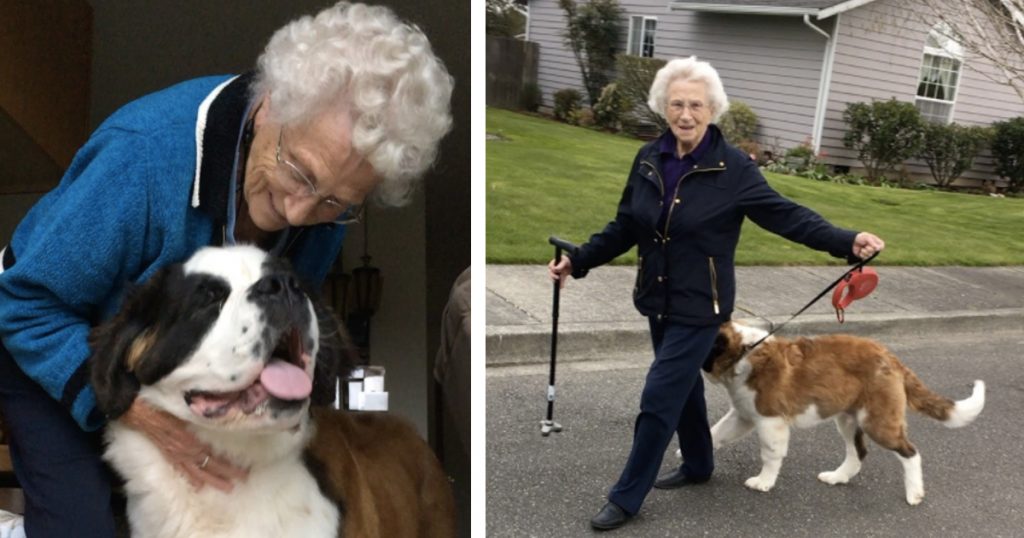 Since being widowed 30 years ago, Sally has lived alone. This 93-year-old loves dogs and quickly befriended her neighbor’s puppy. Now the two are inseparable!

Sally Rewehooeern grew up with animals on her family’s farm in Holland. Her love for the four-legged pals has never waned, even though she has not owned a dog since moving to the U.S in 1953.

David Mazzarella’s family has lived next to Sally for 15 of her 30 years in the area.  When their beloved dog, Blizzard, died the family added a new St. Bernard puppy, Brody, to their family. The adorable pup was 15-weeks-old and new to the neighborhood when he decided to go on a jaunt in his new surroundings. That lone stroll led him to Sally’s door, where he was greeted with love and a snack. They have been bonded ever since.

Sally loves Brody’s company. He frequently follows her around her garden, takes car rides around town, and watches television while giving loving snuggles. Brody’s companionship has given Sally new joy and she is less lonely.

Sometimes Brody follows Sally around while she works in the yard, watering her plants. Other times, Brody will simply put his big old paws on Sally’s window until she notices him.

Sadly, Sally had a heart attack and her family decided it was time to move her into a senior living facility.

Although Sally is doing fine and making new friends at the facility, Brody has been missing his friend dearly. Four months after Sally moved out, he is still running over to her house and putting his giant paws on her window, hoping she’ll arrive.

“He was sad. He was looking for Sally and he didn’t understand where she went,” Edie says.

After seeing his dog grieving the loss of his friend, Dave knew that Brody needed to see Sally. So, he drove the giant dog to the senior care facility for a visit!

The facility is just a short 3 miles away and the moment Brody and Sally were reunited, all was good in the world again!