Sometimes animals suddenly get stuck in dangerous places and it’s hard for the rescuers to help them.

This is a story about a little goat who got stuck in an irrigation pipe. 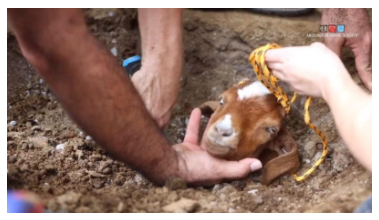 The neighbor of the animal’s owner heard some strange noises and hurried to see what was wrong.

The noises were coming from underground.

So, they called the rescuers team for help. And it was a hard task for the group as the animal was big in size. The team decided to come the other day and be well-equipped.

So, the next day they returned and started looking for the goat but at the same time, they did not have any hope. It seemed impossible to guess exactly the place of the animal. 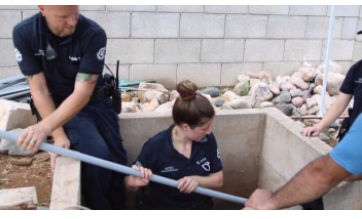 So, they started to dig a random place and hoped that they would find the goat.
They worked about 6 hours and found its head. So, they continued doing their job and they managed to do the task.

Now the animal is free and at that time he was the happiest one. 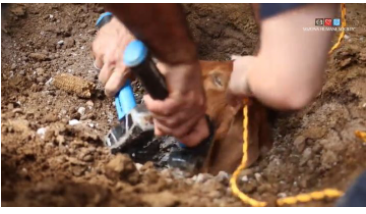 After some time it started to rain and if they did not save the animal on time he would drown down.
Fortunately, this story has a happy ending for both the owner and the animal.

ANIMALS 0 8 views
A young Rottweiler appeared at a local store a week ago. At this time,

ANIMALS 0 16 views
People found five stray kittens in the bushes, and their mother cat was not

ANIMALS 0 29 views
The deer, who was a customer of the shop, wanted to get something. Many

One day the deer entered the store, and then it also brought its children
ANIMALS 0 38 views

On the way back from vacation, the family stopped for lunch at a cafe. After dinner, they found a guest on the hood
ANIMALS 0 38 views

The kitty was sitting on a bench, hunched up like a sparrow and looking at the world with one eye
ANIMALS 0 38 views