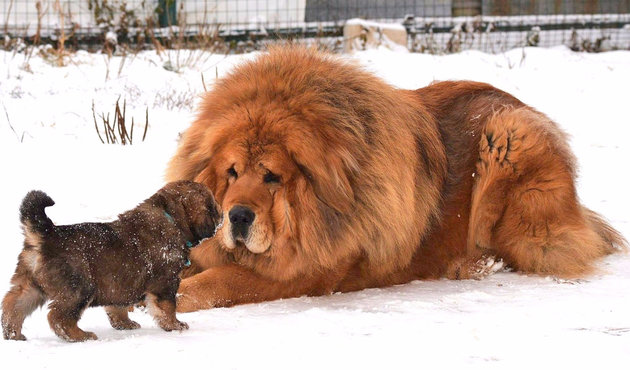 People’s tastes in choosing dogs are very diverse. Recently, some voters gave preference to fighting dogs. Currently, dogs of small sizes that look like toys from a store have actively entered fashion.

Nowadays, a dog named Hong Dong is recognized as the most expensive dog. The dog was acquired by a multi-millionaire and a coal shark of China’s business for 10 million yuan or $1.5 million. The highest price for this dog was set at the auction.

After the purchase, the dog, together with the multimillionaire’s guards, went to his house. Hong Dong (translated as “big splash”) is a Tibetan mastiff puppy that is 11 months old. This dog can bring great monetary benefits to its owner, who is already mentally calculating it. Anyone can arrange a mating with the famous dog of China, paying a lot of money at the same time.

According to estimates, you will need to pay at least 15 thousand dollars for this. The earned profit from the puppies of such a dog is even hard to imagine. In China, mastiffs from Tibet enjoy special treatment. This breed of dog is considered one of the oldest working breeds. They were guards of monasteries in Tibet and provided assistance to nomads in the Himalayas.

If you believe the legends, the owners of mastiffs were Genghis Khan and even Buddha. Anyway, the current owner of the popular dog Hong Dong needs to be very careful. Now he is in the spotlight not only among journalists, but also scammers. For this reason, the name of the owner of the Tibetan mastiff is not disclosed.

The “golden” puppy has now grown up to one meter in height and weighs more than 80 kilograms. Breeder Lu Liang has already warned the owner of Hong Dong that the dog’s menu should be special. Before moving to a new place of residence, the puppy ate selected beef and chicken, and received exotic Chinese delicacies for afternoon tea – these are abalone and sea cucumber.