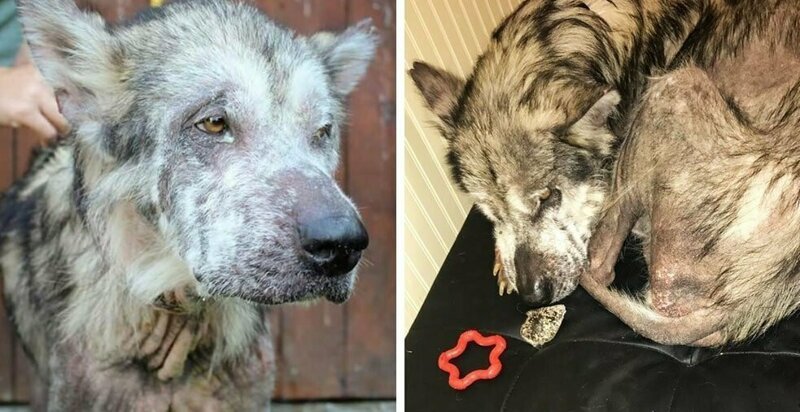 One of them was an Alaskan malamute named Odin. Because of his horrible appearance, it was not immediately possible to determine his breed.

The dog was immediately taken to the vet, and a temporary owner was found, who was supposed to shelter the poor dog until he recovered.

This is a dog named Odin. He was found in a terrible condition and taken away from his former owners.

The dog suffered from a skin infection due to which he completely lost his fur. Although his breed has a huge fluffy fur coat. Odin was also found to have many wounds, dental problems and diseases of internal organs.

Its temporary owner was Sidney Schellkopf, who took Odin to her house.

On the first day, the dog did not understand how to behave in the house. He sniffed all the corners and looked for a trick. He did not believe that he could stay in a human dwelling. Sydney said that at first Odin was lying in one place and did not know what to do next.

After a while, the dog began to grow fur, and there was no trace of the wounds.

When Odin realized that there was no catch, he became much more affectionate and friendlier. The new owner continued the treatment, and the pet became prettier. Now he was on a leash exclusively during walks.Thanks to proper treatment and care, Odin has turned into a completely different dog.

It’s hard to believe that this handsome dog was once sick and emaciated.

Sydney loved Odin so much that she couldn’t give him away and kept him.From now on, he is a happy dog who is immensely grateful for his salvation and a chance for a better life.