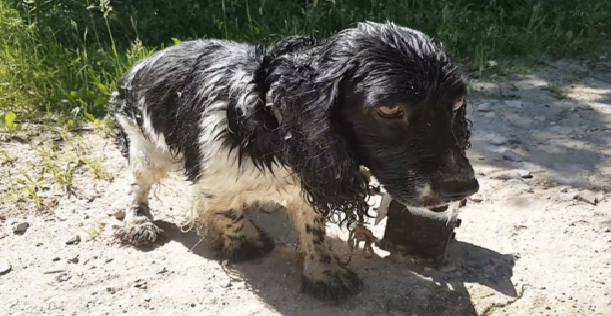 On her day off, Olga was traveling on business. Driving across the bridge, the woman saw a wet dog standing on the side of the road. Olga stopped and went to the animal. The dog was shivering from the cold, and a heavy metal object was attached to its neck.

Obviously, the previous owners wanted to get rid of the animal by drowning it in the river. And they tied the piece of iron so that the dog could not get ashore. By some miracle, the animal still managed to get out of the river and walk to the road in the hope of finding help. Olga could not remove the metal from the animal’s neck. So she put the dog in the car and went to the vet. At the clinic, the dog was released from the load, examined and provided all the necessary assistance.

Since most of the dog’s fur was black, with small white spots, Olga named the spaniel Black. The dog immediately recognized the new owner in the woman and willingly followed her everywhere. 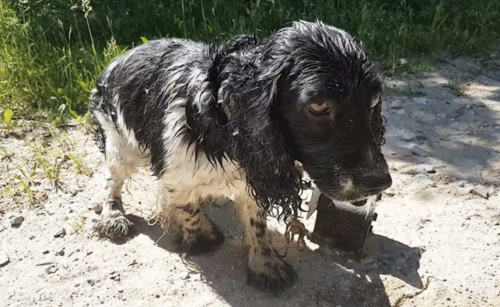 Olga and Black quickly found a common language. The woman took care of the dog, and Black in return showed all the love he was capable of towards her. The woman took up the training of the dog and he proved himself to be a very smart and diligent student.

Black got used to Olga very quickly. He turned out to be an obedient, kind and affectionate dog, who accepted any attention with great gratitude, because he had been deprived of them for so long. The dog is selflessly devoted to his new owner. He obeys her in everything.

Black loves to be close to his owner. He especially likes to walk together on the street. On walks, the dog shows himself to be a real defender, protecting Olga from any, even minor danger.

ANIMALS 0 20 views
The residents of the house heard a squeak. They called the fire brigade to

A contestant in a children’s beauty pageant showed a photo without make-up. As if it was a different person
ANIMALS 0 357 views

11 years ago his foster mother sent him ‘by post’ from the USA to Russia. How does Artyom Saveliev live
ANIMALS 0 357 views

All for the children: an Australian woman has been living on wheels for seven years
ANIMALS 0 357 views

All will be well: How a mother received a message from her unborn son
ANIMALS 0 357 views