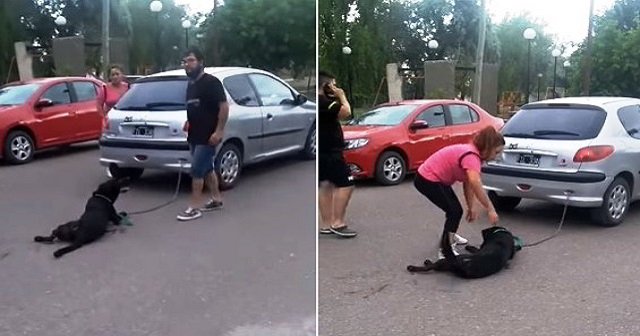 Such cases are unacceptable. It’s really outrageous that some INHUMANS can behave like this female, a teacher by profession, under the pretext that she was punishing her pet to give him an “instructive lesson.”

The woman, identified as Natalia Gaitan, tied the poor dog to her car to make him run after the car at high speed.

This sad incident occurred in the Argentine city of Mendoza, and was recorded by several passers-by who passed through this place and could not believe what they saw.

The defenseless dog was dragged by his 43-year-old owner, who was riding in the car to which he was tied, as punishment for leaving the house without her asking.
Outraged passersby not only filmed what this woman was doing, but also saved the poor animal, forcing her to stop so that the dog would not suffer anymore.

How could she act so cruelly with her devoted pet to “educate” the poor animal? Without a doubt, the behavior of this woman leaves much to be desired, especially since she is a teacher by profession!

As soon as passers-by managed to stop the woman, they were able to help the exhausted doggie, who received
numerous injuries.

The dog loves his tormentor so much that when a woman approaches, he does not stop wagging his tail as a sign of love and loyalty, immediately forgiving her everything!!!

This woman will be convicted of animal cruelty. And now she will have to answer to the court for her aggressive behavior towards her pet, who received several injuries, and there will also be a question about the possibility of continuing her teaching activities.

According to witnesses, she dragged the poor dog through at least six streets, while the woman was driving the car to which
the animal was tied at a significantly high speed. The evidence of this cruelty was visible on the asphalt, along which animal was dragged by the non-human,as the street was covered with blood from wounds on his legs.

After people forced this woman to stop the car, she dared to answer calmly, as if she had done nothing wrong:

“I was just punishing him for disobedience,” Natalia said without hesitation.

The passers-by present and representatives of the public organization protecting the rights of animals filed a complaint against Natalia, who will now answer before the law.

In Argentina, the law on animal cruelty provides for punishment for such behavior for up to one year in prison and an impressive
fine, as well as a ban on keeping pets..

The dog was taken to a shelter, where he was named as Felipe. The center cured his injured paws and now they hope that a family will appear who will want to take him home and give him a lot of love.