In Komsomolsk-on-Amur there is a unique monument to a dog named Naida. This dog has become a true legend among the locals and its history is really worthy of a monument.

The owner of Naida died in a car accident, and the dog remained in the place where everything happened. The animal remained at his post for 12 years, all the while believing that the owner would soon return for her. The locals pitied the dog and fed her little by little. When it became clear that she was not going anywhere, a booth was built for her. Over time, a monument to Naida appeared in the city, created on the initiative and with the money of local residents and patrons from all over the country.

In 2005, there was an accident in which Naida got into. Then the driver abruptly drove into a pedestrian crossing and knocked down a man to death. The dog during the accident severely injured his paw. For a while Nayda, some said that she ran away, others claimed that caring witnesses of the accident took her to the vet.

A few days later, the dog returned. She resumed her post at the bus stop, carefully peering into the faces of those who got out of the transport or entered it. The locals understood that the dog hoped to find the deceased owner, so they did not chase her away. As the years went by, Nayda still remained at the bus stop, she became a real city landmark.

Nothing was known about the owner of Naida, but the dog’s behavior delighted everyone who knew her story. People fed the dog, eventually, they made a booth for her.

Several times they tried to find new owners for Nayda, but she did not stay anywhere for long, always running away and returning to her post at the bus stop. The dog was wary of outsiders, she allowed herself to be fed only by local residents, whom she had studied well over the years in one place. Some journalists wrote that Naida trusted Tatiana Gromova the most because the woman had been caring for the dog for a long time.

Nayda spent 12 years at the bus stop and in the park behind it. When the reconstruction was carried out in the park, Naidu was taken to the nursery, but she could not live here. Away from the usual environment, the dog became sad and began to refuse food. In the end, the activists ensured that Nayda was returned to her «post». 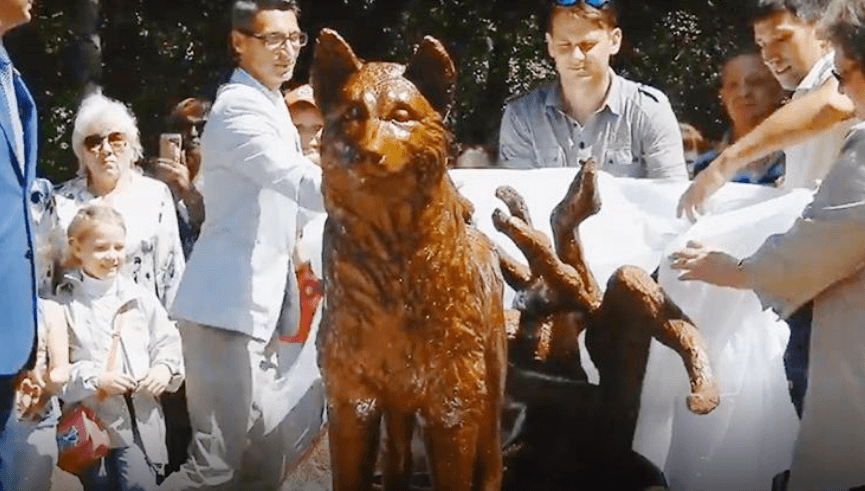 In 2015, Nayda got run over by a car. The dog was taken to the veterinarians, but despite their efforts, a week later Nayda was gone. In recent days, Tatiana Gromova was next to the dog.

After the death of Naida, the residents of the city erected a monument to her, the money for which was collected by the whole country.

ANIMALS 0 23 views
The deer, who was a customer of the shop, wanted to get something. Many

The kitty was sitting on a bench, hunched up like a sparrow and looking at the world with one eye
ANIMALS 0 132 views

On the way back from vacation, the family stopped for lunch at a cafe. After dinner, they found a guest on the hood
ANIMALS 0 132 views

They were begging for salvation
ANIMALS 0 132 views