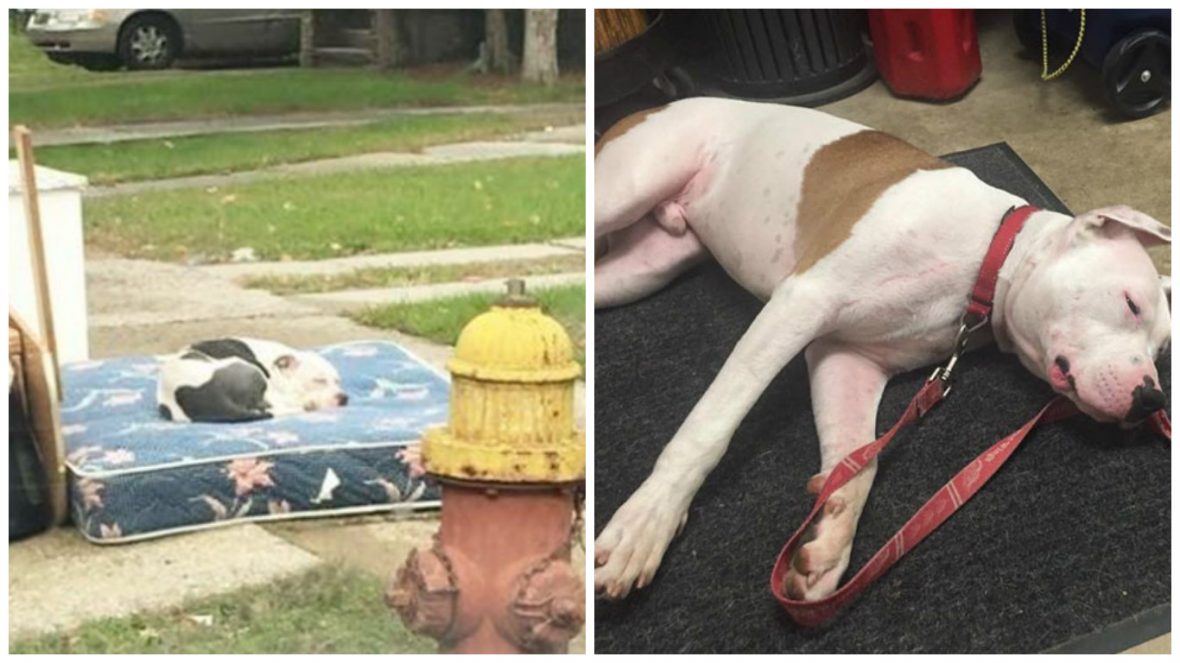 Dustin Oliver is a member of the Detroit Youth & Dog Rescue charity, which provides assistance to homeless young people and dogs. Having received information that the owners who moved to a new place of residence abandoned their dog, the man went to the specified address and saw that a pit bull was curled up on a mattress left on the street. Obviously, the dog was waiting for the owners to take him with them. But, unfortunately, they didn’t.

Oliver says that the people who left did come back for some things, but they never took the dog. They abandoned everything they didn’t need. And, unfortunately, the pit bull was on this list.

The volunteer gave the dog the nickname Boo. At first, the dog did not make contact and did not allow anyone to approach him. The man did not rush things so as not to scare the animal away. He just started talking to the pit bull and sat with him late into the night.

In the morning, Oliver went to his new friend’s house again, taking a delicious breakfast for him. He took a couple of McMuffins with sausages for the dog, as well as two hash browns. Obviously, the treat was to Boo’s taste. Because he ate everything at once, without leaving a crumb.

The volunteer did not give up trying to gain the dog’s trust and one evening Boo allowed him to put on a leash. After that, the man just talked to his ward for 45 minutes. Oliver recalls that that evening he tried to convince the abandoned pit bull that all the bad things would pass and no one would hurt him anymore.

The next stage of the dog’s rehabilitation was a visit to a veterinary clinic. During the time that the above events took place, the story of the pit bull flew around all social networks. People reposted the very first picture of Boo, where he was lying on a mattress. There were even those who wanted to take the dog for themselves. In addition, many people decided to provide financial assistance to Bоо, and it turned out to be very timely, since parasites were found in the dog’s heart, and he needed urgent treatment.

It soon became clear that the volunteer had not spent so much time talking to the ward in vain. Hearing the voice of his savior, Boo, who was being treated at the clinic, immediately ran out to meet the man and began to “hug” him.

Oliver says that this is an ordinary American pit bull terrier. The dog is very trusting and tends to cling to people. So far, there is still sadness and misunderstanding in his eyes, why they did this to him. But after all the experience, Boo gradually comes to his senses.

The volunteer says that he tries to pay a lot of attention to the dog and take care of him, as well as the rest of his wards. The best reward for Oliver is happy animals that have found a home and restored trust in people.

Bоо underwent a course of treatment for heartworm, after which the foster family took him into their home.