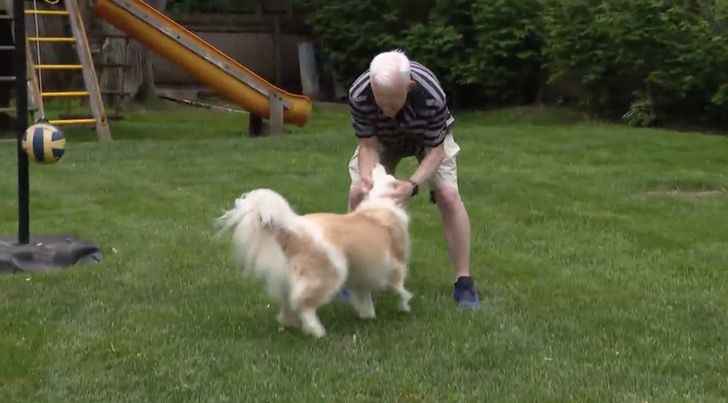 Lost dogs will always do their best to get home. But when Lex got lost, he had a lot of obstacles for his return. This dog is deaf.

It all started with the fact that one day a dog wanted to go play in the backyard of his house in Illinois, USA. John Rollins, his owner, who is also deaf, didn’t think it was a problem, so he opened the door for him.

But, unfortunately, the dog escaped.
«So I let him out. And then I went back to watching TV. But about five minutes later, I got a warning on my watch that Lex had left the property,» Rollins told Fox 2 Now.

«Since the dog is deaf, we can’t just call him. He can’t hear us. And that’s why we were very worried that something might happen to him,» he said.

«We were worried that the dog might run away. But when we found out about the collar (with GPS), we were glad.»
So the tracker collar lit up as soon as the dog left the house.

However, at the time, John’s family was scared and didn’t really know how the device worked. John became desperate mainly because of the busy intersection near his house.

I thought: «Maybe the app on my phone will tell me where Lex is. I looked and saw that he was on another street. I immediately ran there. There I saw some people hugging something.And I thought it might be Lex.»

I approached them and they asked: «Is that your dog?» And I said «yes, yes,» John explained.

Fortunately, everything ended well and the family is glad that the collar worked. Therefore, it is recommended that every dog has a GPS with him, since it is unknown when they may get lost.